– in the future, the option will be added to list the statistics for specific tanks within the game
– there are plans to fix the personal missions in the “last man standing” mode, no ETA
– developers are fixing the HD models of vehicles released in HD quality as first ones
– the developers will fix the MM in order for tier 8 vehicles not to appear constantly in tier 10 battles
– Polish branch? “No comment”
– there are no plans to fix the situation where WZ-132 ammo rack explodes too often
– there are no plans to buff penetration or hitpoints of the TVP T 50/51
– regarding the roof armor of American premium T34, the developers are asking players not to whine about it anymore and instead to compare the roof of the old model (left) to the new one (right):

And a wtf image I got emailed today by Beast Killer who says: “Now we know why the Maus tank is so big :P” 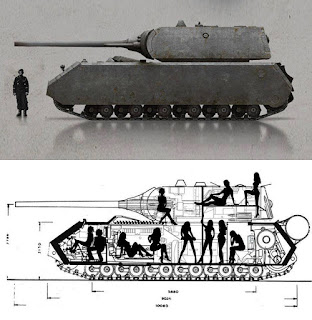 Guys… may you never change. 😀